Originally named The Voice of Reasoning. A Retired Newark Pro Firefighter and Owner of Viddiots Production, a editor and producer himself, Freddy gets his  Wiseguyz comedy from growing up in the streets of Newark. As well as learning from some of the funniest/smart ass guys on the Fire Dept. He has gotten to know and meet many former Wiseguyz all over NY & NJ. He even got to know and become friends with some of the original Sirius XM Wiseguy show cast members. Freddy “The Fireman” is known keep the rest of the Wiseguyz in line and is definitely the Don of the show.

Pete “The Chicken Man of Alcatraz” 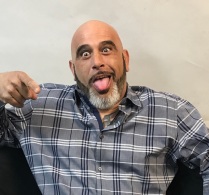 A guy that grew up in the streets and is one of the biggest animal lovers known to mankind. But he’s no vegetarian. He has a new found love for working an honest job and making a decent living by sending chickens to the slaughterhouse. His time growing up in the streets and meeting people from different walks of life has given him the opportunity to be associated with actors, magicians, wrestling legends, promoters, and trainers. He is by far the most unpredictable of any of the Wiseguyz.